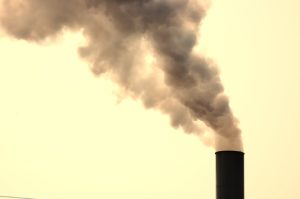 When it comes to climate change, there really is only one measure that matters, the total quantity of Greenhouse Gasses (GHGS) in the atmosphere. That is why policy-makers tend to favour absolute measures of emissions. The UK Climate Change Bill targets set out a legal obligation to reduce absolute emissions of “carbon units” by 80% by 2050 compared to 1990 levels.  This equates to around 3% per annum reduction every year for the next 40 years

However, despite their environmental credentials, it does not take long to spot some obvious weaknesses with applying absolute emissions targets to organisations or individuals. The first issue is that of economic efficiency – some organisations can achieve emissions reductions much more cheaply than others, and so setting a uniform 3% per annum target across the economy, or within an organisation, would not be the most efficient way to achieve a given emissions reduction. Another flaw with absolute targets is the issue of boundaries. Whereas a national frontier does not change, organisational boundaries are rarely static: acquisition or disposals can give the appearance of good/poor performance in absolute terms without any indication of true underlying improvement, unless there is readjustment of baseline data to account for the changes. To compound the boundary issue, there are aspects of equity ownership or control which makes absolute emissions reporting at an organisational level even more complex.

This explains why the idea of an emissions intensity, in which emissions are divided by some form of activity measure – typically a production or turnover figure – has gained widespread acceptance.  Examples of emissions intensity metrics are all around us: from the gCO2 per kilometre we see quoted for motor vehicles, through to gCO2 per pack used in product labelling and the many companies that use these to describe their emissions targets. The common use of these intensity ratios reflect their simplicity and the ease with which they can be understood by the public.

An underlying attractiveness of intensity ratios is that they permit comparisons to be made. Knowing the g/km for a single vehicle is of relatively little value, but knowing that of a range of vehicles can inform choice by the consumer, help manufacturers establish their relative performance compared to others and permit policymakers to set performance targets for different sectors of the economy. These types of intensity ratios often rely on a defined scenario to set the benchmark – for example the UK vehicle emissions are quoted for the “typical journey cycle”.  More complex industry benchmarks of energy and emissions, such as the Solomon’s Energy Intensity Index in the refining sector have hugely complex scenarios to enable comparisons to be made.

Intensity ratios can also be used for internal benchmarking, typically tracking changes in product intensity over a number of years, and many organisations quote these targets rather than absolute targets as they feel it will overcome the negative effect growth would have on absolute emissions. However there is a huge hidden risk in in placing reliance on intensity ratios as a measure of emissions performance: the “baseload effect”.  A practical example might help illustrate this better: several years ago I met a senior executive for a major Canadian automotive manufacturer who proudly boasted that over the previous 5 years they had continuously reduced the emissions intensity of the manufacture of their trucks even as volumes increased.  In fact these emissions figures formed part of the marketing of the company concerned.

I sketched out the following diagram on a napkin to explain to that executive why I felt that publishing their performance in the form of an intensity ratio could entail some risk: 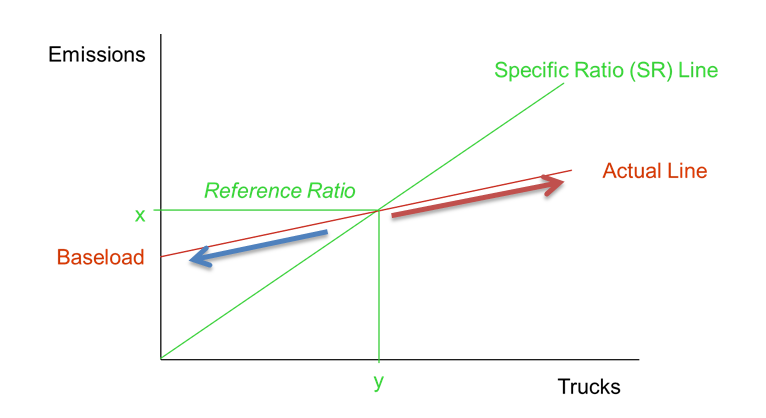 Fig1: the underlying danger with specific ratios or intensities as a measure of emissions

What the truck manufactured did to establish their intensity was to take the total emissions in a particular year and divide them by the production that year, as shown in in the figure above, x tonnes for y products. However the intensity ratio suggests that there is a linear relationship back to zero – in other words if there is no production then there will be no emissions. The reality is quite different. The automotive factories in Canada use quite a lot of energy (and so generate emissions) completely independently of production, such as the lighting and heating of the assembly halls, offices, and so forth. In fact it is not unheard-of for the fixed load in an automotive plant to approach 50% of the overall demand, which is reflected in the diagram the above by red line. So what does that mean for our Canadian example? Well as production rose through the factories then the fixed load was divided over more vehicles and so the intensity improved irrespective of the underlying performance of the plant. In effect they tracked along the red line following the red arrow to the right of the reference ratio. The risk lay in the opposite effect – if the volume fell below that of the reference year, then the plant would track along in the direction of the blue arrow, significantly above the reference intensity, as the fixed baseload is divided by ever decreasing volume of cars.

We have seen that improving intensity ratios do not necessarily reflect performance improvement and so should be used with caution. A particularly dramatic example of how intensity ratios can confuse can be seen in the published environmental performance of a major UK Water plc. In 2006 they reported over 18% reduction on their emissions per megalitre, compared to 1990. Well we already know from the previous example that when the volume of production increases the baseload effect tends to improve the intensity, so some of the improvement could have been as a result of the baseload effect. However, there was another bigger effect at work here: energy conversion factors.  In 1990 the conversion from a kWh of electricity to a kg of CO2 was 0.77 Kg CO2/kWh, while it was 0.52 Kg CO2/kWh in 2006/07 – a reduction of 32% in the period. The fact that the emissions intensity of the company had improved is true, however the implication that this reflects underlying performance improvement rather than the de-carbonisation of electricity supply in the UK, is questionable. Because most emissions data are a product of an energy conversion factor there is an additional challenge in their interpretation, given the regional and temporal variations in these factors. If a product is manufactured in country with a low electricity conversion factor, such a France which has a lot of nuclear power in the generation mix, it will have a lower emission per unit. This does not mean to say that the French factories are more efficient than those in higher conversion factor countries.

If the use of intensity is problematic at a company level, it becomes doubly so as a means to measure operational performance, where different equipment and processes are driven by different variables, not just production volume but weather etc. The most common operational modelling technique employs regression analysis to derive a formula in the form y=mx+c where y is the expected emission m is the emissions intensity per unit activity (production, or weather etc.) and c is the baseload. The effectiveness of this form of modelling has been proven in thousands of Monitoring and Targeting (M&T) programs where this technique is employed to set targets to drive operational improvement. M&T targets differ from intensity targets in that they are rarely used for benchmarking, e.g. comparing different buildings, but to provide a comparison with historical performance against which corrective action can be taken. M&T Targets tend to work best at a very low level, such as individual plant or equipment, and so a single facility can have many different targets using a variety of different variables, which can be complex and difficult for outsiders to understand.  Luckily the performance can be aggregated up from these individual models using techniques such as CUSUM, which are beyond the scope of this article, but which makes the M&T technique appropriate to track and report organisational-level performance.

If we examine the three main interlocking schemes to manage UK emissions we can see how hybrid approaches involving both an absolute and intensity metrics are emerging in practice. As long as they get their absolute “caps” policymakers are willing to incorporate more flexible intensity ratios in the “trade” element of many emissions reduction schemes. In the EUT-ETS Phase 3 emissions permits will be allocated across 50+ product categories on the basis of the average emissions intensity of the best 10% of producers. If you are in the top 10% then you will receive nearly all the emissions allocations you need – whereas if you are a poor performer according to the benchmark you will have to buy more allocations in the market or undertake your own emissions abatement activities to compensate. The total emissions allowances remain capped – but their distribution is based on intensity ratios.  In the Climate Change Levy, and associated Climate Change Agreements, most sites have opted for an intensity-like product-mix algorithm to relate their target emissions reductions to the production output(s) of their facilities. Even in the CRC League Table there is some concession towards growth in that 25% of the score is based on the emissions intensity change intensity per £ turnover of the participant. In fact the global vision for equitable emissions allocation combines an absolute goal, contraction (of total emissions), with an intensity goal, convergence (on per capita emissions).

So we have seen that absolute, intensity and operational metrics all have their pros and cons when it comes to managing emissions, and it is not unusual to see these used together at both a national and corporate level. At the end of the day the form of reporting with highest environmental integrity must remain absolute emissions. But, like a balance sheet in a company, this form of reporting rarely provides enough insight to inform day to day performance management, and for that we need the “management accounts” of emissions – intensity or operational metrics which provide many advantages as long as we avoid potential pitfalls. 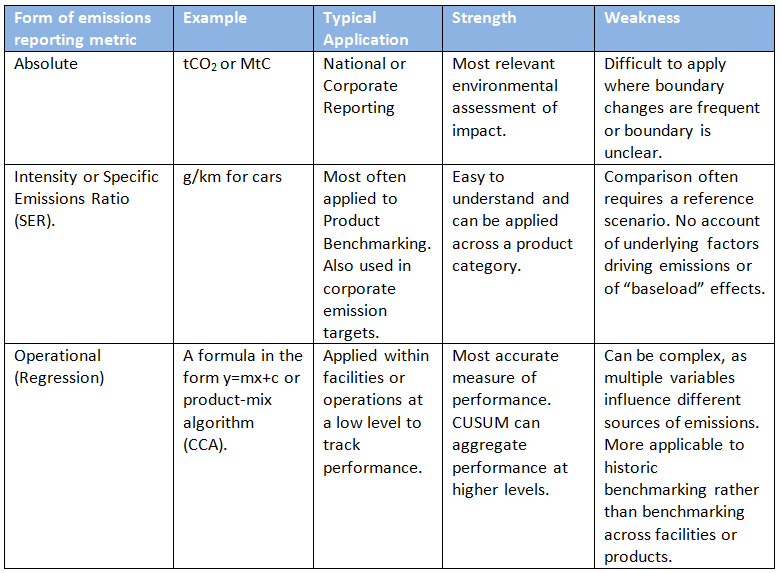 This article was published in The Environmentalist magazine in January 2012.

Follow the following link for a copy of the article.