Why I remain optimistic.

Several pieces of news have caught my attention in the last few days which have challenged my generally positive outlook on climate change issues. Despite this, I remain stubbornly optimistic about our ability to rise collectively to the challenges we face, as I will explain…. first though, the bad news…

Let’s start with the report from the BBC of a recent study by  Eun-Soon Im, Jeremy S. Pal, and Elfatih A. B. Eltahir. This considered an aspect of global warming which, I must admit, has passed me by – that is the impact of temperature on human survival. Not, I hasten to add, the conventional “dry bulb” temperature measurement we are all familiar with from weather forecasts (and which are hitting all-time highs in Europe in the last few days, in excess of 43 °C in Cordoba, in the south of Spain, for example) but rather the more esoteric “wet bulb” temperature.

If you look at a wet bulb thermometer, it literally does have a “wet bulb” with a sock that is kept moist with with distilled water via capillary action. Which brings to mind another surface that has capillaries and is cooled by evaporation – human skin. As warm-blooded creatures we need to maintain our core temperature around 37 °C. The reason that we can survive in higher-temperature environments, like Cordoba this week, is because the relative humidity in Cordoba has been around 5% at the hottest times of day, giving a wet bulb temperature of around 17 °C (you can use a psychometric chart or the NOAA calculator to look up the values), allowing for plenty additional heat loss via evaporation from the skin. For our cooling system to work the wet bulb temperature must be lower than 35 °C – any prolonged period above this, however fit we are, will lead to certain death as our body temperature rises. Indeed, a wet bulb temperature over 31 °C should be considered dangerous to human health.

The second item that caught my attention was from the New York Times, which uses data from James Hansen and Columbia University to illustrate two important phenomena, as shown in the charts below, taken from the article.

Here we can see two series of weather data from the Northern Hemisphere, the first from 1951 to 1980 and the second from 2005 to 2015. As we can see from the combined illustration on the right, the average temperature, represented by the peak of the distribution of temperatures has increased (by around 1.5 °C ). This reinforces countless other studies that demonstrate that global temperature increases are real and significant.

More important, though, is the fact that the curve has flattened – that is to say that the frequency distribution of temperatures has broadened. The apparently modest average increase of temperatures in the Northern Hemisphere of 1.5 °C masks the fact that the warming effect of climate change is uneven, with some regions experiencing very much greater increases. Given that we know excessive heat (or rather, wet bulb temperatures) kills humans, our focus should look beyond the headline temperature increases promised by policies such as the Paris climate accord, to the specific impacts on locations and communities that are likely to occur.

My final piece of depression-inducing news comes from another study quoted in the Guardian newspaper that calculates that we have just a 5% chance of achieving the global 2.0 °C  temperature rise goal set out in the Paris accord. Based on current policies the median is likely to be 3.2 °C rise by the end of the century, twice that which we have observed to date, and somewhere between the two scenarios modeled in the first study, above, making the deadly “humid heatwaves” with a wet bulb temperature over 31 °C a regular (1-2 year) event for millions of people.

So what are we to conclude? First, is the obvious, as the letter to Nature quoted in the Guardian states “Achieving the goal of less than 1.5 °C warming will require carbon intensity to decline much faster than in the recent past.” Second, we need to acknowledge that material development is an essential part of our ability to adapt to and survive extremes of climate. Access to air conditioning and good medical facilities will be essential to the survival of poor agricultural workers of the Indian subcontinent, when – probably not if – these deadly humid heatwaves strike.

In short, we need to deliver both greater prosperity and considerably fewer emissions. Not only do we need to substantially improve our energy (and resource) efficiency on the demand-side but we also need to accelerate the supply of renewable and low carbon energy. This is where my optimistic persona kicks in.

You see, I believe that we already have the knowledge and expertise to deliver a substantial improvement in energy and resource efficiency which adds value at an individual, corporate and social level. Second I have observed the incredible pace of innovation that is driving the adoption of technology. Consider the key enabling technology that will allow intermittent energy generation technologies (such as wind, solar and tidal) to perform on a par with conventional, “on demand” fossil fuel generation from gas and coal – energy storage. Lithium battery technology is set to decrease in price 100-fold, from $10,000/kWh in the early 1990’s to $100/kWh in 2019 – in fact prices are so low that IKEA are now offering customer battery-storage packs as an add-on to solar energy systems. Indeed, lithium ion technology may supplemented by other even cheaper storage technologies such as rechargeable alkaline batteries. LED lighting has revolutionized illumination. Wind energy is now cost-equivalent, or better, than fossil fuel generation in many markets. 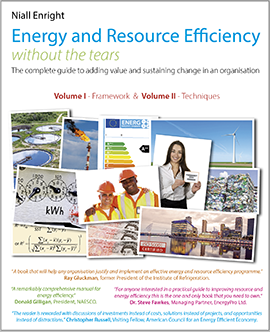 My optimism is because I have long believed that the challenge for us is about implementation not invention. While it would be great, and very helpful, to have technologies like large-scale carbon capture and storage or thorium nuclear reactors in place – these are not prerequisites for a profound decoupling of emissions and development. I am not alone in this observation. Some influential commentators, like Jigar Shah, are adamant that the challenge for us is not innovation, but deployment.  Jigar cites the Deep Decarbonization Pathways project as strong evidence that existing technologies can deliver the scale of emissions reductions needed. Indeed, my free book, above, on energy and resource efficiency is my own small effort to encourage uptake of techniques that are proven to work and deliver value today.

Another news story that caught my attention this week reinforces the message that delivery is key – I read with interest that orders for the new all electric Tesla Model 3 car stand at a staggering 455,000 units, before production has even begun. This in the same week as many governments and car manufacturers are promising the complete phase-out of petrol and diesel vehicles variously between 2020 and 2040. The radical transformation of our transport system is underway using current technology – and is bound to accelerate as new entrants enter the market (an Apple iCar, anyone?).

That is not to say that we aren’t faced with real challenges and dangers. In our way are policies which subsidize and insulate fossil fuels from their true cost, barriers within finance that are impeding uptake, and ignorance and sabotage from vested interests. But the decreasing effectiveness of these obstacles – such as Scot Pruit’s dismantling of Federal programmes addressing climate change – is also a source for optimism. In the US state, city and citizen action is largely neutering the political dogma – actions speak louder than words and money speaks loudest of all. It is the inherently superior alternatives offered by efficiency and new technology that are attracting the investment – not the newly blessed coal mining industries. Financiers can see companies like Tesla disrupt old and outdated technologies and they want in on the action.

My only cause for concern is that, while we in the (relatively) affluent world celebrate the over-subscription of the Tesla Model 3, we need to remember that it is in the fertile river valleys in India that we will see the real measure of our success in transforming our use of resources.

Nope, on reflection, I am not depressed by the news – I am reinvigorated by it. To start with, I think I will check out those batteries at IKEA…