I want to share an argument that I have used on many occasions when faced with audiences who are yet to be convinced about climate change. This is summarized by the diagram below.

This illustration reflects, in the columns, the positions that folks adopt about climate change. Some think that it is real, others not. Of course, we cannot change these columns, one will be prove to be right and the other will be wrong.

The rows, on the other hand, reflect the choices we make. We have two choices, A or B – either we take effective action on climate change, or not. That choice is under our control.

Clearly, we want to avoid the red box – where life as we know it comes to an end. Thus the only rational choice is “B”, to take action on climate change, despite some uncertainties about the consequences of inaction.

President Trump’s announcement of the US withdrawal from the Paris Climate Agreement made in the Rose Garden of the White House yesterday unambiguously represents Choice A.

The statement Trump made justifying this decision relies on two central arguments, which are understood by reference to the table above.

First is the argument that the Paris Accord is not Choice B (i.e. it will do little for climate change). To quote.

Even if the Paris Agreement were implemented in full, with total compliance from all nations, it is estimated it would only produce a two-tenths of one degree — think of that; this much — Celsius reduction in global temperature by the year 2100. Tiny, tiny amount.

Indeed, as the PolititFact site clearly elucidates, there is some truth in this statement. Scientists and climate change advocates have also been very clear that the commitments made in Paris were not enough. But they did see Paris as the framework through which countries could tighten their commitments over time. Indeed, Paris was a real milestone in that developing countries, too, agreed to targets for the first time. So saying that the first step is not enough is not an argument for stepping backwards.

The reader will note that there is no downside portrayed in the bottom left box, where dangerous climate change is not real, but we have nevertheless substantially transformed our organizations to reduce emissions and adapt to rising temperatures. While individual businesses, such as the coal industry, may well see a substantial reduction in their value unless they change the core business model, the majority of organizations will gain from resource efficiency to address climate change. That is because using less energy and creating less waste reduces costs. Delivering more efficient products will provide a competitive advantage. The new technology gold rush to mitigate carbon emissions will create countless business opportunities and thousands of jobs. Anticipating rather than reacting to regulation will create greater degrees of freedom for business operations extending, rather than diminishing, their licence to operate and innovate.

The second, essential, strand in the narrative of denial is to dismiss the notion that the lower-left box will lead to a better world even if climate change does not exist. Unless the fact that action is detrimental can be established, the precautionary principle would suggest that Choice B should be taken even if the probability that climate change is real (since the consequence of climate change is so catastrophic). To quote again.

Of course, this is total nonsense. The outcry by large sections of US business following the announcement is a reflection of the broad consensus that acting on climate change is good for business and thus for jobs and prosperity. This motion of loss is further articulated

China will be allowed to build hundreds of additional coal plants. So, we can’t build the plants, but they can, according to this agreement.

Notwithstanding the selective misinformation inherent in these statements (again, see PolitiFact), they also do not reflect the fact that how countries reduce emissions under the Paris Agreement is under their own control. It was the choice of the US to limit coal (albeit of the previous administration), not an external imposition. Indeed, the notion of contraction and convergence accepts that poorer countries will need to increase their emissions somewhat (while remaining well below the per capita levels in the US) as a matter of justice and fairness – after all they need to have power for hospitals and schools don’t they? The fact is that Paris provides the only framework where India and China can currently join in, and be held accountable, with global efforts on climate change.

Reducing arguments about humanity’s future to jingoistic “them and us” demeans us all. All those working on climate change are doing so in order to both elevate the human condition for all and to preserve the environment on which we all depend. It isn’t a zero-sum game, where either a US blue-collar worker or a brown-skinned person has to be sacrificed.

These arguments and a discussion of the precautionary principle are covered in greater depth in my book “Energy and Resource Efficiency without the tears – the complete guide to adding value and sustaining change in an organization”. Please do check it out – the PDF is free if you follow the link right.

I will leave you with a cartoon from the book: 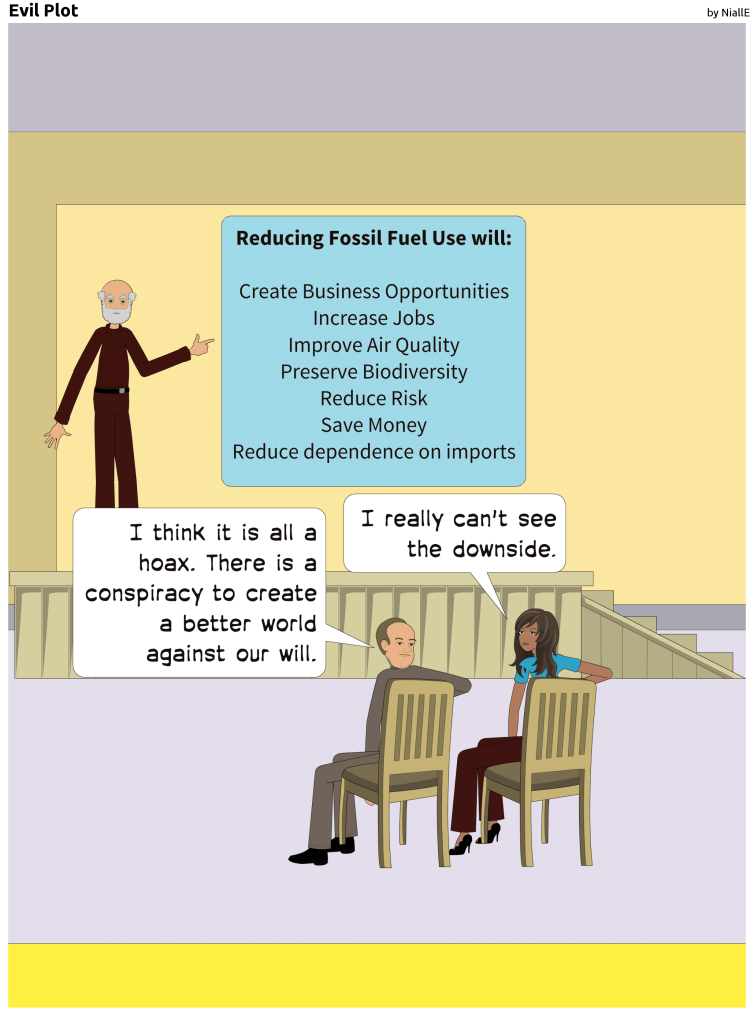